Shopping > The HTC Titan Is Another Monster Smartphone For Sale

The HTC Titan Is Another Monster Smartphone For Sale

The mobile realm is definitely expanding in size and breadth. The HTC Titan is one of those smartphone making it so. This one is given a huge screen and a processor to back it up. You may throw away your PC or MAC. Take a closer look at the new Titan here in this short article.

When you think of a big screen and you know your models, do you think of HTC? Well, you will soon. The HTC Titan is given a 4.7 inch display that is a huge slice of digital real estate as far as smartphones go. That is 11.94 centimeters for those of you who do not live in the United States. By comparison, the Apple iPhone has three and half inches for their display. The HTC’s monster screen is more than an inch larger than the iPhone’s. The screen for the Titan is not specifically very clear. It has 800 by 480 pixels of resolution, the same as many Samsung Galaxy models with smaller displays. The good news is that the display is not made from older LCD technology. It is a SLCD touch screen with all the features that a modern smartphone is expected to have. There is no manual keyboard for this smartphone. 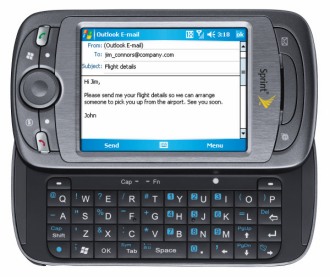 Does the HTC Titan have what it takes on the inside to support such a large screen? The hardware is fairly impressive, especially the processor. It is a dual core 1.5 gigahertz chip with an Adreno 205 GPU ( Graphical Processing Unit ) to take care of graphics. The setup is assembled by Qualcomm, who are typical chip makers for HTC. The internal memory is moderate in size at 512 megabytes. The bad news is that is all there will be for storage space. The HTC Titan has no slot for a MicroSD flash card.

Microsoft is the maker of the mobile operating system inside the HTC Titan. They advertise the Titan as a smartphone that lets you “work big and play big”. No arguments there. The software version is Windows Phone 7.5 Mango. There are hundreds of new features, like “App Connect” and “Groups”. Groups in particular is an improvement in the “People” hub. It is now possible to create groups of contacts with the Group feature. After creating the group, a “Live Tile” can be created and place on the home screen for quick access. This software was impressive enough to Microsoft to also be their design for Windows 8.

Wirelessly, the HTC Titan is nearly up there with the best of the best. The Wi-Fi radio can also handle DLNA. That stands for Digital Living Network Alliance and is a replacement for the HDMI cable. It sends a multimedia signal to a nearby monitor or television. The signal can be sent across a fairly large room. Bluetooth is still in version 2.1 for this smartphone. The 4.0 version is the latest from Bluetooth. The 4.0 version is at least twice as fast as 2.1, sometimes faster.

This smartphone is priced at €512 Euros (around $767 dollars) or a little less and is already available in the United Kingdom.